The month of October ends with the arrival in our cellar in Arona of two new testimonials of the fantastic world of Guffanti cheeses, which is thus enriched with new colors, aromas and tastes.

The characteristic of these two products is that they are made to evolve by the producers, in particularly suitable places, and, therefore, in the Guffanti cellars they are only finished and not already fully bred. For this reason they also keep the name with which they are baptized by the producers.

We come to the first cheese

La TOMETTA DELLA MINIERA from raw cow's milk from Valtrompia, raw paste produced with grafted milk and therefore without the addition of ferment, from animals in season to pasture.

Small in size, semi-cured in an old mine (from which it takes its name) and finished in the Guffanti cellars where the crust is treated with the use of small doses of linseed oil (in the Valtrompiese fashion, hence the amber hue of the crust with its typical elasticity of that treatment).

Interesting color of the paste, strong aroma testifying to a clear and pleasant taste. 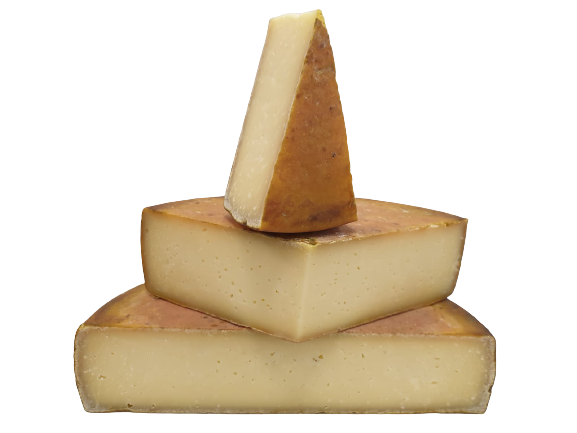 PECORINO FAUGLIA which owes its name to that area of ​​the Pisan territory in which it is produced.

Very important size (even over 9 kg), proposed by the producer already with a good seasoning (we have lots of spring 2021) carried out in natural caves; therefore already pleasant product immediately but which is also put to rest and care in our cellars because it can be seasoned for a very long time.

The pasta is semi-cooked and the curd, after being put into shape, is pressed manually.

The paste is very light, compact and almost chalky, has a good aroma and, at the current maturation, a fresh taste with vegetable notes of astringency destined to disappear over time in favor of a more intense and full taste, with the contemporary evolution of the structure as well. of the pasta that becomes pleasantly staggering.

In a nutshell, two products with a personality that fit well into the already wide and interesting range of Guffanti's farmed cheeses and, particularly not negligible, at a well-calibrated and balanced price.

"Sometimes you just have to leave everything as it has always been. We were born naked, free. And we learned to dress because it was cold. Then we thought it wasn't enough. And to feel better we started to add. Excess. And inevitably, compromising something that Nature had already made perfect. Yet, even after many years, it takes little to move us. Even without suffering any nostalgia for our past. Even without renouncing our creativity or give credit to the mediocre. By being passionate. In the end, it is enough to leave everything as it has always been."   Luigi Guffanti, allevatore di formaggi dal 1876

A wonderful reinterpretation of the classic Piedmontese robiola with presamic coagulation, made with milk from free-range, pasture-fed sheep. It is one of the sheep's milk variants of the great robiola tradition of Northern Italy.

A brand new cheese for summer 2022: goat cheese with vegetable rennet. Soft and delicate fresh cheese made from whole goat's milk.The production area is in the municipalities of the Lucania hinterland where indigenous goats are found, facciute and murscenare, which produce a milk from which a cheese rich in suggestions is made. Produced according to tradition, with the addition of vegetable rennet from thorny thistle (cynara cardunculus) by grazing goats that have always had their natural habitat in the so-called marginal areas of Basilicata, and it is here that the cheesemaker has been producing cheese for generations.

Be among the first to know what is happening in the World of Guffanti: events, new products, initiatives and stories.